Got to love those Genes!

Day two of bed rest and getting through the reading list!

After nearly 4 months of Unemployment and a fair few knock backs at interviews, I occasionally find myself at a bit of a low ebb. Last night was one such time. “Raised a Catholic always guilty” I remember a cousin saying to me once in Ireland. Although I have not practised since I was 15 when I could no longer make sense of the hypocrisy of the Church, I have always felt indelibly touched by it through my upbringing and feel increasingly drawn to it as I get older.
I have always held a spiritual belief, in nature and that it must have been created by something. I hold this to be true through common sense and rationalisation.  However, I find myself drawn to the idea of Jesus frequently. I fully accept the historical Jesus Christ, but am not sure about the Jesus of the Bible. Clearly this is a leap of faith, but one I am struggling to make.
With this in mind, I challenged God to give me a sign I should make this leap, and what would it look like. I am not sure what I expected, a bolt of lightning maybe, perhaps a burning bush or a swarm of locusts?
What did happened is I heard these songs in this order whilst my I Pod was on shuffle:
My city of ruins – Bruce Springsteen

Jesus was an only son – Bruce Springsteen

Something in the water – Carrie Underwood

Half of me is furious with myself for being so weak, seeking comfort in difficult times , opiate of the people etc. the other half feels like I’m waiting for something to happen. Was this it? Advice and thoughts welcome…Enjoy the tracks.

“I don’t like this,” my mother said as she set the dinner table. “It’s getting to be a bad habit.”

The rest of my family out-voted her. So my brother placed the portable black and white TV on a snack table in the corner of the kitchen.

It was fall, 1967, and I was a senior in high school. Between bites of dinner and sips of milk, my family watched the news unfolding from Vietnam. As a student who thought history was her best subject, I was interested in the logistics of it all, the politics. My ability to watch young men being ripped apart on a 16-inch screen and then say things like, “Please pass the potatoes,” evidently didn’t bother me.

Then Ron Kovic got shot.

Ron Kovic grew up one block over and two blocks up from our house. He and his friends were a staple of my…

Interview Thursday, job offer Friday – I can’t express the relief I felt. I took the call on the train to London with a pal as we were off to see The Who, Paul Weller, Kaiser Chiefs and Johnny Marr at Hyde Park. What a joy, a great day of music ( and a few beers if I’m entirely honest!), crappy food after said beers and an uncomfortable night sleep in a mistakenly booked double bed ( my friend hogged the bed and broke wind repeatedly in a Beer soaked, kebab induced snore fest).
Still, I had shared the good news with family who promptly congratulated me, told the neighbours who had been concerned about the amount of time I was spending at home.

All was good, I returned from London with a bit of a swagger, Rock and Roll and an end to unemployment.
Monday came, no call.

Tuesday, they must be re cutting areas to get me in.

Thursday – The call – “We offered you the job as we were making an acquisition, we no longer are. We’ll keep your details and be in touch if anything changes.”

This is different to a standard rejection. It is an acceptance followed by a change in circumstance, and four months in, it hurts. 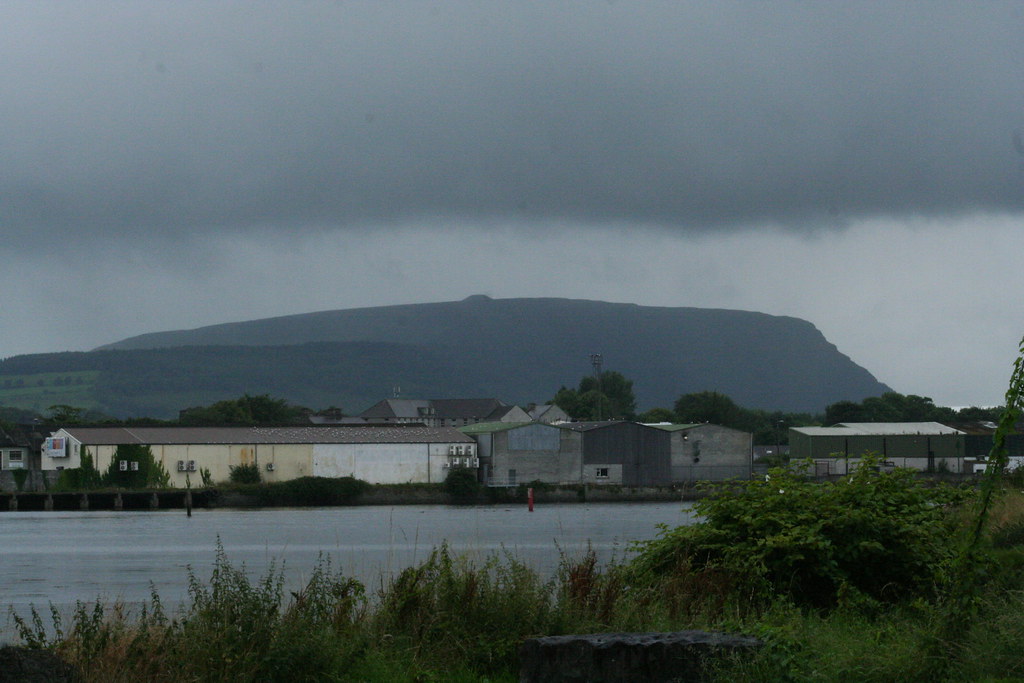 Knocknarae as seen from Sligo.

“UP THE MOUNTAIN ye were?” the woman said to me.  I tried to look at her from the passenger seat, though my glasses were bedazzled with raindrops.

“Picked a day for it, too,” I said, and she laughed, and clicked her tongue.  She was in her mid-seventies, wearing a corded cream wool sweater and speaking to me in that rough thicket of an Irish country accent that I encountered anytime I left the main towns and met a sexa- or septuagenarian.  “My name is Aidan Ryan, by the way,” I said – appropriate, it seemed, now that I’d been soaking her upholstery for a few minutes.  “Oh, not many Ryans here,” she said.  And that was all I got out of her.  I never learned my driver’s name.

Before  you tell me, I know how lucky I am. Another interview tomorrow in Camarthen brings me back to the Gower for a few hours at Rhossili before some prep and an early night.

I am not sure it is a job that I really want but I am starting to go a little stir crazy and struggle a little with self confidence, worth etc. It is a bad sign that the main driver for accepting the interview was the fact I knew it would bring me to the Gower. I shall give it my best shot!

I know deep down that something will happen job wise eventually, rejection when repeated is however a bit of a bitter pill.  I am quite happy to take a step backwards career wise if need be but the timing is important, I’ll give it another month or so before I start applying for roles heading backward. Besides, we are off to Cornwall at the end of July for a family week, can’t wait! As they all get on with their busy lives now and I am not working, I can see how frustrated they must have been when my head was forever at work. Lesson learnt for next time, must switch off and enjoy…

“In my mind there’s no sorrow…”

My life is bearing all the hallmarks of a mid life crisis. First there was the decision to take voluntary redundancy, as discussed previously this was either brave or stupid depending on your point of view and my ever changing state of mind. Next was a ponderous drive past my childhood home and teenage haunts.
We lived in the aforementioned family home from when I was five, my parents moved out around 3 years ago just as I hit 40. A beautiful, big house we were lucky to have, in a nice area. By the time my two elder sisters moved out I was lucky enough to have the whole of the third floor of this house. I had left school at 16 and moved out, but returned to live when I returned to A levels.

Anyhow, I drove past the house the other day and had a flood of memories from the last time I saw my maternal grandfather being stretchered out following a heart attack to my first romantic fumbles and the last time my Mother left the house when it was sold and I escorted her out of the door for the last time as she wiped away a tear and all of the memories stored in a house where a family grew for 30 odd years.

From there I traced my walk to secondary school, past the houses of numerous old girlfriends ( Rachel, Emily,Manon, Cecilia) and friends who were girls who I wanted desperately to be more (Abigail,Ellen, Jenny, Cait) and friends who were like brothers (Tim, Andy,Russell, Richie, Lee). In fact these guys were brothers, blood brothers thanks to drunken inspiration  with a pen knife outside the Coach and Horse one long summer night! Once up by the school I stopped to view the hub of my teenage life.

Now standing as an estate agent there was once a place so full of wonder and togetherness it is hard to fathom it has gone.

St Michaels Guest house had a prefound impact on all areas of life, It needs a separate blog which will follow. Any how, whilst on this indulgent journey I had a call from Andy. I have known Andy for 25 years and we speak infrequently on account of the fact that we are both lazy and poor at maintaining contact, however when we do, it is like a time vortex takes us back to a point where we worked, drank and shared everything – including a few girlfriends over a few years.

Andy called to say one of the old gang was in town from Singapore for a night, let’s meet for a beer.this was a no brainier.

The last time I saw Jasper he had long hair and smelt of josticks, not to mention the fact he was an excellent drummer in the mould of a cross between John Bonham and Animal from the Muppets. Jasper is now a very respectable teacher, though I’m please to say he still has a mischievous glint in his eye.Over the course of the evening we worked out that my eldest son is now five years younger than I was the last time I saw Jasper. Time has a twisted sense of humour.

Also present for this one off, Martin ( a real gent now with his own successful business, new wife and Merc) and lovely Martha who I have not seen for as long as Jasper. It is funny how so much time can pass without speaking to each other but it all seems so natural. We were sat in the Kings Arms, scene of many a legendary tale from our teenage years and bar the presence of more than a few grey hairs and a competitive view of crows feet – it really could have been any time between 1988-95.
How glorious and how bitter sweet, Bob Dylan’s dream sums it up nicely:

With haunted hearts through the heat and cold

We never thought we could ever get old

We thought we could sit forever in fun

It was all that easy to tell wrong from right

And our choices were few and the thought never hit

That the one road we traveled would ever shatter and split

Garden leave over on Monday, company car returned today – Time to get real, real and resilient.

A brave stand I made, may appear foolish now. As Lennon noted in “I’m a loser” , it appears true that pride does come before a fall.  I am anxious about still not having a job, not being able to provide and mostly missing the meaning that work gives to the day to day. I always thought that was a cliche, but now I feel it and know it to be true. Was it the right thing to do? I still think so and regret is a waste of energy.
On the other hand, Thus far in my life I have been truly blessed and have always worked hard but never really struggled. I guess sooner or later, we all have to face the Darkness on the edge of town.